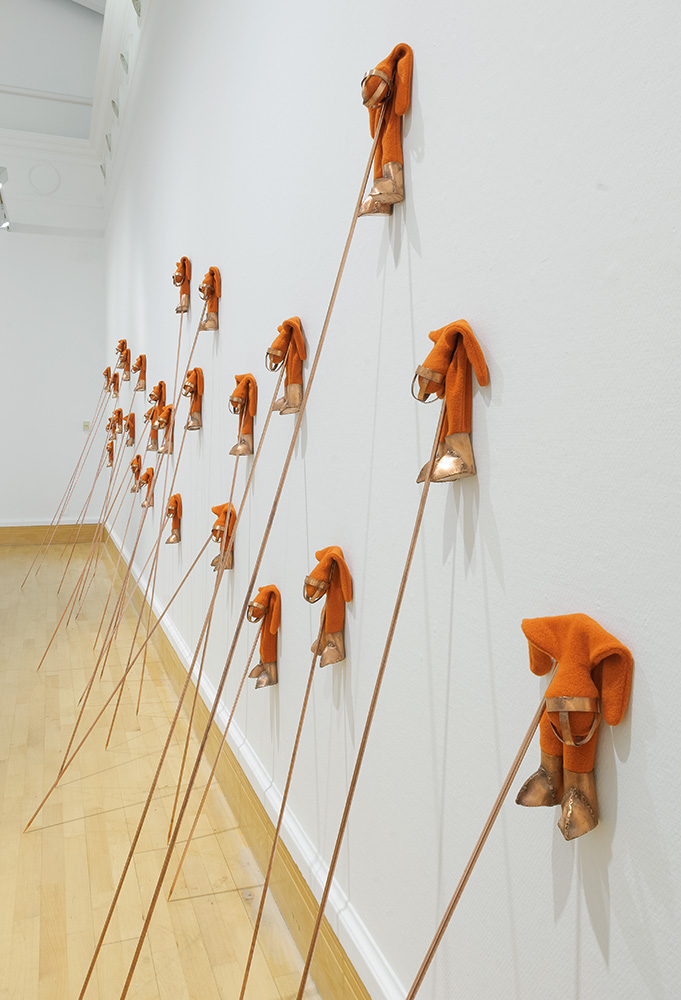 Permindar Kaur is a UK sculpture and installation artist, who is known to include textiles in her practice. Using an approach that incorporates childlike and domestic objects to explore ideas such as cultural identity. Her body of work has received international acknowledgment and she has exhibited widely.

Can you explain a little about your work, in general, your projects, ideas and concepts involved in your art practice using examples of your work.
My approach to art is playful, using childlike objects to explore the territory of cultural identity, home and belonging. I use simple forms, for instance furniture (beds, cots and chairs) and toys (soft, brightly coloured figures, trucks and animal forms). These objects resemble displaced domestic belongings, which have been distorted and manipulated to invoke the uncanny. They are deceptively familiar in their appearance and initially might remind the viewer of innocence, childhood and play belying their sinister undertones.

I’ve always had a fascination with armour. In Innocence (1993), a child’s dress made of a rich orange coloured fabric carries a knife. It refers to Sikhism: That is, the idea of carrying a weapon as a symbol of strength. When the use of armour initially appeared in my early work it was to do with barriers, defining one’s space as one’s own and then marking out the territory of the home. The armour does not in fact defend but acts as a hindrance or offers only partial protection.

In 1998, I was commissioned to make a work to mark the fiftieth anniversary of Indian Independence. I wanted to make a work which could be read on both a political level and a personal level, relating to the idea of a martyr. In Independence (1998) there are 27 figures made from a soft polar fleece. They’re unstuffed, so they hang limply, and they wear these heavy copper boots and helmets that weigh them down. Armour is never made from copper, because it’s too soft and heavy. Further to their plight they were then impaled against the wall by long copper spears. They are the remains of an army defeated in an unknown battle.

How did you get involved in art, particularly using textiles as a material in your practice?
Art was something I always wanted to do. I remember drawing the ‘Michelin Man’ over and over again and I knew from a young age I wanted to be an artist. After studying Fine Art at Sheffield Polytechnic and an M.A. at Glasgow School of Art it seemed a natural progression to carry on full time as a sculptor.

I initially worked with steel, wood, rubber, clay and copper. When I was living in Barcelona in the early 1990’s my work became much more personal, intimate and about emotions and I started to explore textiles as an artistic medium. Perhaps, it was the result of working in a new environment where my British/ Sikh identity was no longer the main focus of my creativity. While in Spain I began to enjoy incorporating brightly coloured fabrics in combination with iron and steel.

It was an ideal way to look at ideas about the uncanny, comfort and discomfort, and safety and danger.

What role and significance do textiles have to your work?
Key to my practice is an interest in materials and making, both of which are as important as the concepts contained within the work. Fabric adds a soft more playful element as it softens my work from its otherwise harsh connotations.

The fabrics I use vary from satin, cotton, polar fleece to bonded felt. But most of the time I like using plain fabrics with strong bright colours. When I do use patterns, they are chosen to represent homely and the domestic environments. I find it fascinating that patterns on fabric vary depending on where they originate, as the textile patterns one finds in Barcelona are markedly different from the ones available in Sweden, the UK or India.

Another material I discovered, whilst on a residency at Banff, Canada in the mid 90’s, was polar fleece. I became excited about this fabric as, apart from the amazing colours it came in, I discovered that it was made from recycled plastic bottles. I liked that it was soft and insulating like a blanket and could be incorporated into the themes about protection that I was working on.

There has always been a play between textile, which has a strong element of decoration, and the minimalism I adhere to in my work. My use of textiles imbues minimal objects with intimacy. I am as interested in welding as I am in sewing. Cloth and metal are very different primary materials, that both require specialized methods of preparation and construction. I use textiles as I would metal to construct solid forms, to play with the hard and soft, co-joining two opposing materials in harmony to explore the relationship between them, to question aspects of safety, protection, and defence.

What are your influences – in personal terms, in your approach to art, and in the wider sense of culture, history and politics?
My undergraduate time at Sheffield defined my visual language and set my path. It was here that I started working on ideas about my childhood and cultural identity, and it is something that I have kept coming back to throughout my career. During this time, from mid 80’s to early 90’s the established artists that inspired me were – Leonora Carrington, Louise Bourgeois, Rebecca Horn, Jannis Kounellis, Mike Kelly, David Hammons and Bruce Nauman to name but a few. I was interested in how they expressed ideas and the possibilities of the language they used.

I have always been aware of the difference between my Sikh heritage and my British upbringing. While this is important, it is only one aspect of my work. I have and continue to explore other themes that are relevant and important at the time of making such as control, hierarchy and the home. I tend to use familiar household objects, sometimes surrealized, to realise the creation of personal identities. My intention is to play with ambiguities so that one is never quite sure of the identity, or origin of my objects, and to try to avoid the artwork having a predetermined, or closed, meaning. Ultimately, that’s what allows the work to be both familiar and unknown – often with confusing and slightly uncanny qualities.

Do you feel that you being a woman links to the art you make or to women who view it or more generally?
The work I make is defined by being female, British and Sikh. These aspects influence my approach, my interests and how my artwork is being perceived. It has directly impacted the shows I was asked to take part in and what I felt was expected of me, even though I tried not to be limited by others’ expectations. I try to avoid my work having factual readings, which prevents the predominance of social and political dimensions defining my work.

Being an artist of Indian descent has always been my primary identification and how my work has been perceived. It has taken precedent over other creative aspects. Subsequently writing about the female side is harder, even though it is as relevant.

It is such a complex and dynamic topic that has constantly changed from when I first started making art to the present. The role of women in art has developed as society has changed.