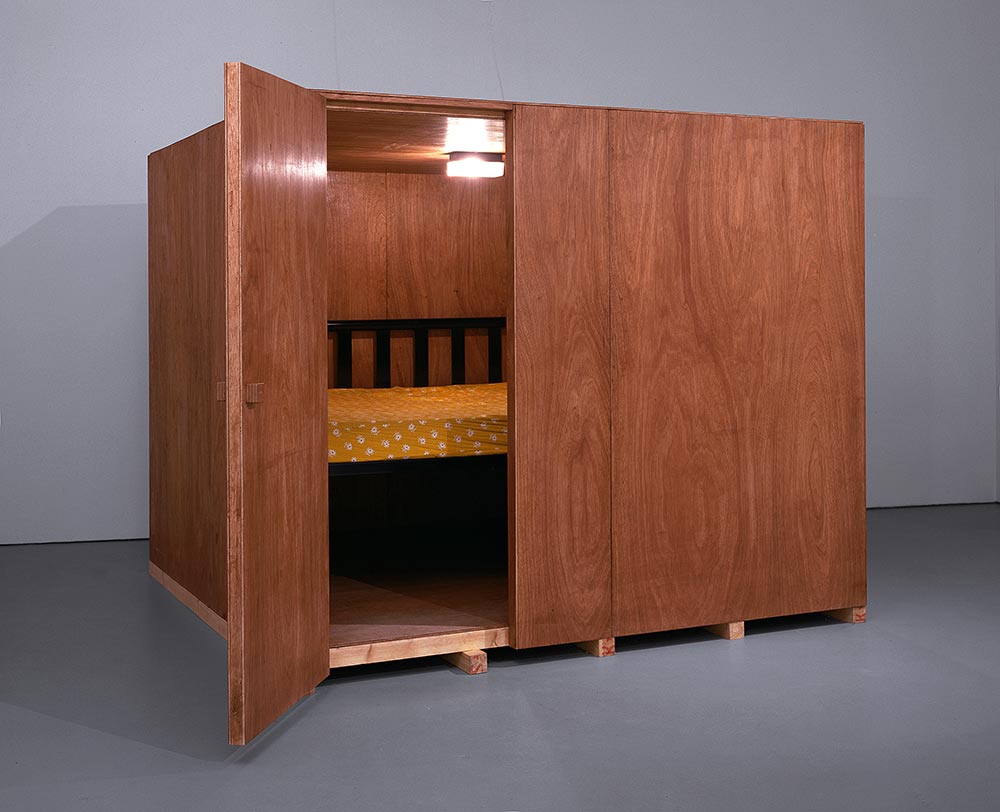 You cannot enter this exhibit without commitment. You may open the door and view but you cannot experience without entry. The dynamics of the space come into play immediately and visually from the open door, but the interaction of the visitor with the space properly occurs when the individual both bodily and spiritually, yields to the interior. To appreciate this space, you must enter it alone and submit yourself to whatever feelings surface. One has to Yield control and one has to trust. Swift escape from danger is not possible and by placing ourselves in such a position we oppose our most primitive instinct.

The need for an available escape route forms part of the evolutionary theory of Appleton (1975) who emphasized the importance of places which offered both prospect and refuge to our forebears. The ability to spot prey far off and to escape from predators contributed to survival. Such places remain favored in our own generation. This space fails to support either. It is not possible to see out and it is not possible to escape. By entering the cube, we are forced to face those inner thoughts, fears and memories which will inevitably surface in this environment of no distractions.

Because the interior symbolizes both security and confinement, it presents us with the human dilemma, the urge to return to the security of the womb balanced against the need for freedom to expand and explore. Other stresses between security and threat are implicit in the space. The primal image of refuge proposed by Bachelard; the need for withdrawal into the shell (1964, p. 16) is challenged in this space by an aversion to being buried alive in the same shell. Similar archetypal images of the home, originally proposed by Jung as refuge and hearth (1969) battle those of procreation, birth and death. While many of the tensions exist at the unconscious level, there are others, which are more superficial.

On the more conscious level, Clare Cooper Marcus (1972) sees the home as a symbol of the self. As such it is the public expression of self and represents the identity by which the individual wishes to be known. Viewed as home, this space may suggest failure rather than identity, a prison rather than a refuge.

Research has found that the meaning of any space is generally different for the layman and the expert. Where the expert employs an objective and therefore cognitive stance, the user tends to be more subjective, with the importanee placed on how they are feeling. “Designers tend to react to environments in perceptual terms (which are their meanings), whereas the lay public, the users, react to environments in associational terms.” (Rapoport, 1982, p. 19, Since these associations are learned we can expect to find individual differences based on differing life experiences and also differences between cultures as well as the evolutionary similarities noted previously.

Although the importance of learning is crucial to the human experience, the ways in which learning occurs may reflect personally type (Jung, 1923; Keirsey, 1984). Preliminary work by Mithani (1998) finds a correlation between personality type and favourite place. If this is so, then it is equally likely that other aspects of place, such as the importance of familiarity, the amount of space required for comfort, the desire for privacy and the aversion to closed spaces may also reflect personality type.

So, experiencing this enclosure, its immediacy, its connotations, its meaning for any one of us, will reflect our personality and past experiences. Memories and associations will be provoked into consciousness. Both the total enclosure and the bed may provoke a range of responses. No doubt there will be differing degrees of claustrophobia experienced in this exhibit, but there may also be individuals for whom this space is therapeutic. Entering the space is voluntary and the duration of time spent there on the bed is under the control of the individual. Given the importance of choice, control and privacy to human development it is possible that will be fulfilling. Without such control it would be difficult to see the space as anything other than restrictive and punitive. This may indeed be the intent of the artist, but I suspect that the drama lies more in the examination of the self that is provoked and in the individuality of their conclusion.