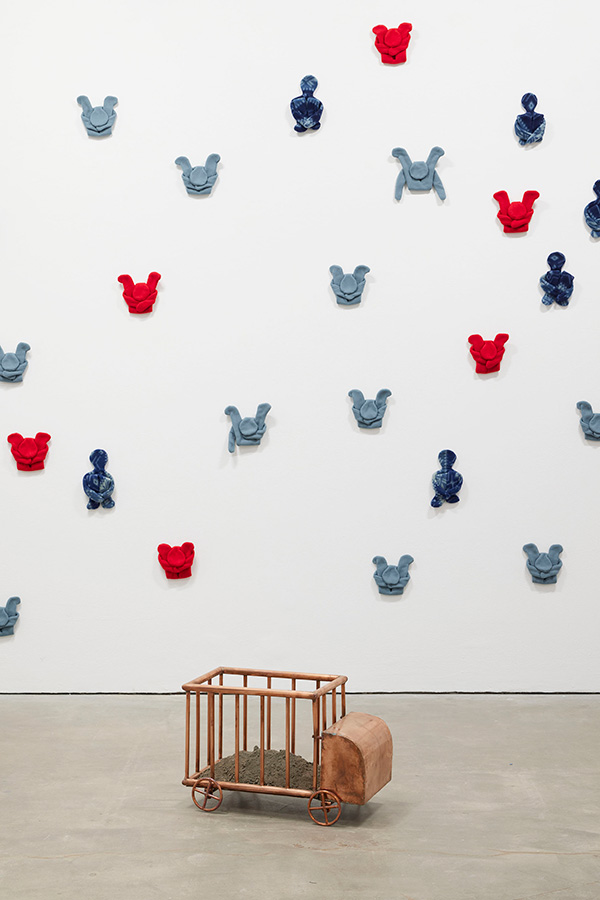 Roo Dhissou, an artist and research assistant for the exhibition A Very Special Place: Ikon in the 1990s, reflects on how her research into Ikon Gallery’s displays of work by Global Majority artists in the 1990s has offered new perspectives on her own practice. Her work at Ikon has been supported by a research continuity grant from the PMC, awarded in 2020.

The exhibition Cold Comfort, held in 1996, presented new work by Permindar Kaur and was the result of a commission from Ikon Gallery, Birmingham. The preface to the exhibition catalogue stated that ‘Kaur removes the domestic and the familiar from their everyday surroundings and transforms them to produce disquieting results’. This is evident across Kaur’s practice: she pushes the boundaries of materiality and scale to interrogate what it means to be truly comfortable. In July 2021, on the show’s 25th anniversary, I had the pleasure of inviting her to talk with me for a live-streamed public event. My research supports a series of exhibitions at Ikon that reexamine and celebrate the gallery’s programming from the 1990s, and includes the privilege of researching the gallery’s archives, conducting interviews and meeting with artists returning to Ikon as they install works for display. Here, I reflect on how ‘cold comfort’ as a concept might help us to articulate issues faced by Global Majority artists in the contemporary art world today, particularly in Britain.

As part of the recent exhibition A Very Special Place: Ikon in the 1990s (June– August 2021), Kaur’s work Falling (1996) – first shown in Cold Comfort – was reinstalled at Ikon. As an artist myself, when I reflect on this work I cannot help but think about a falling art world. I would hate to be all doom and gloom, but with news of cuts to higher education for art and design courses; the government-backed advertisement last year that told creatives to retrain (showing a ballerina next to the words: ‘Fatima’s next job could be in cyber’); and the pandemic diminishing production time for artists and graduates, I find myself romanticising the 1990s. It’s an era I can only ever imagine, having only just been born then. But over the last six months at Ikon, I’ve felt like Owen Wilson in Midnight in Paris, wandering about the city in the 1920s with his artistic and literary heroes. Whereas Wilson spent his time in bars and at parties, I vicariously experienced the arts scene in 1990s Britain through my research for A Very Special Place. Speaking to Kaur about what it meant to her to be an artist practising during that time was especially meaningful. She told me humbly about her luck as a graduate in the 1990s, and described Eddie Chambers as a key supporter. Chambers was a member of the BLK Art Group in the 1980s, and after leaving the group he continued to champion other artists of the Global Majority. This leads me to question where we might look today for those key supporters, or, better yet, to ask, what does support look like today? In a falling art world where resources are thinning, how can we best imagine support systems?

Reflecting upon my own journey, my support has been in the form of collectivising through groups such as SAAC (South Asian Arts Collective) and through mentoring support, artist-run spaces and Instagram. Most of this support is self-initiated and often comes at a cost, such as free labour, intense networking, managing multiple roles (photographer, marketer and personal assistant) within an artistrun space and endless hours applying for funding. Although none of this is new to most artists, the equality gap for artists of the Global Majority is ever-increasing, as the hierarchical and often competitive systems that underpin galleries and arts funding perpetuate a culture of token representation. In the wake of George Floyd’s death last year, and the focus on the Black Lives Matter movement during the pandemic, there has been a shift towards representation of ‘BAME’ artists – members of the Global Majority – with open calls and retrospective exhibitions appearing around the world, and an increased focus on Global Majority artists on social media, resulting in performative gestures. While new opportunities are appearing everywhere, supposed support systems could be cold comforts in disguise. Larger representational gaps are being perpetuated through this action: the system still exists – it is just being fed repeatedly. As Audre Lorde wrote: ‘The master’s tools will never dismantle the master’s house’. Representation is annexed to a number of exhibitions, talks, workshops and HR meetings rather than the prevailing system being axed. I call them cold comforts because they only provide temporary relief, and it is yet to be seen whether these actions are sustainable. Much like Kaur’s work Tall Beds (1996), also exhibited in Cold Comforts and consisting of three elevated beds each over three metres high, it is incredibly tempting to climb their ladders, yet when arriving at the top, it is just as terrifying to look down from the unprotected edge.

When interviewing Kaur, we spoke of the audiences that were present during the 1990s. She stated that they were not as large or as diverse as today, so when she used certain symbols within her work, such as the dissected Khanda within Glass Houses (1991), or the Khalsa orange within Innocence (1993), they were less likely to be instantly understood. This made me wonder how the cultural connotations of works by Global Majority artists were read during that time, and how norms among audiences opened or closed their interpretive possibilities. Yet what I found most refreshing and perhaps consoling was the openness of Kaur’s approach to meanings within her work. Her reflections on creating Innocence while living in Barcelona are a prime example of this: ‘it drastically altered the way in which I thought about making work, because the context was completely different. Exploring ideas about being an Indian artist in Britain became no longer relevant’.

Innocence consists of a black frame containing a traditional Sikh dress with a Kirpan (Sikh sword), both of which have been made for a child. Whilst the work draws on cultural identity, the piece is not limited in its interpretation, thanks to the visual and aesthetic properties within the work. Without knowing its cultural or religious references, viewers are still able to see the harsh juxtapositions both of its materials and of placing armoury upon a child’s dress. Kaur states that the work has multiple readings. Innocence highlights how cultural identity is a limited framework even when cultural referents jump out at audiences.

The fact that Kaur was able to objectively reassess her art and reevaluate its themes in a new context is something I find incredibly freeing. As emerging Global Majority artists, perhaps we could use some of this openness to understand what it means to make work about cultural identity. Of course, we have an impetus as artists, curators, researchers and audience members to know the conceptual or cultural meanings of works. The growing sense of urgency around dismantling white supremacy in the arts encourages us to research other peoples’ cultures, but whilst this is important, it belies and belittles an idea of not knowing. There is something beautiful and empathic in the intrigue that Permindar Kaur happily allows. Moreover, even without such interpretations, Kaur’s work sits boldly within the context of sculptural and material art making. As Eddie Chambers writes, using identity to understand Kaur’s work ‘would leave us distinctly short-changed because such symbolism takes its place alongside but not above, or ahead of other equally dramatic devices and elements central to Kaur’s sculpture’.

For emerging artists of the Global Majority, there are yet again cold comforts to be found in making art about cultural identity. It is absolutely important for work to be made that celebrates cultural identities; allows people to confront and reclaim their cultural heritage; provides relief; and aids both accurate and sensitive representation in contemporary art. But the cold comfort is the inherent exhaustion in having to continually educate and explain the context of artworks and unpick the cultural elements that may be present. Artists, researchers and curators have been calling, instead, for multiplicity in interpretation for a long time.

Reflecting on my own journey as a practitioner, this freedom is perhaps what I lacked in art school. Now, my practice is led by ideas of multiplicities. For a show with Niru Ratnam Gallery, I produced a series of sculptures that interrogate and explore cultural identity through ambiguity, materiality and context. They feature religious objects associated with Hinduism and Sikhism that are sometimes massproduced, sometimes unique and, in one case, Shiva Lingam (2021), made following instructions from YouTube. As the curator of the show

Niru Ratnam wrote: ‘Dhissou made the latter despite the traditional Hindu stricture that as an unmarried woman she is not supposed to touch a shiva lingam… What is at stake when cultural traditions can be warped using an internet tutorial? The cluster of small objects, placed low to the floor on wooden blocks, subtly question the notion of cultural authenticity as traditions get translated, half-forgotten and improvised in diasporas’.

This approach, where cultural elements appear in artworks without being the whole focus of the work, has allowed me to be free of stereotypes and pigeonholing, and to exist outside of a myopic rhetoric of ‘identity art’ as I pursue interests that may lie both within and beyond my cultural heritage. While it seems that we may not be free of cold comforts for some time, I will carry forward the freedoms I have learnt from Kaur and continue an approach to my practice that allows for multiple interpretations.