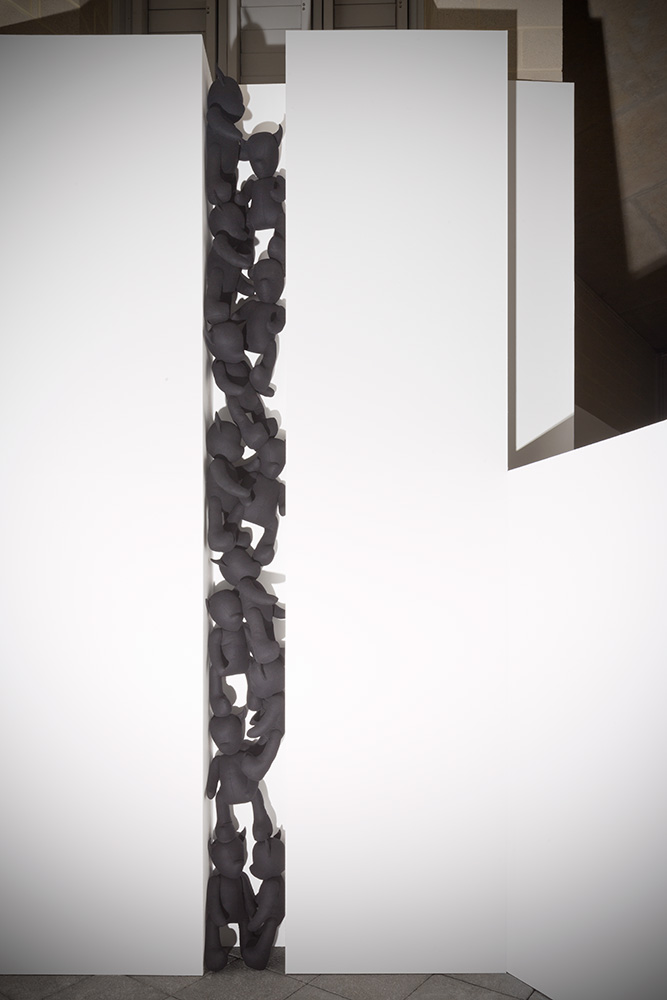 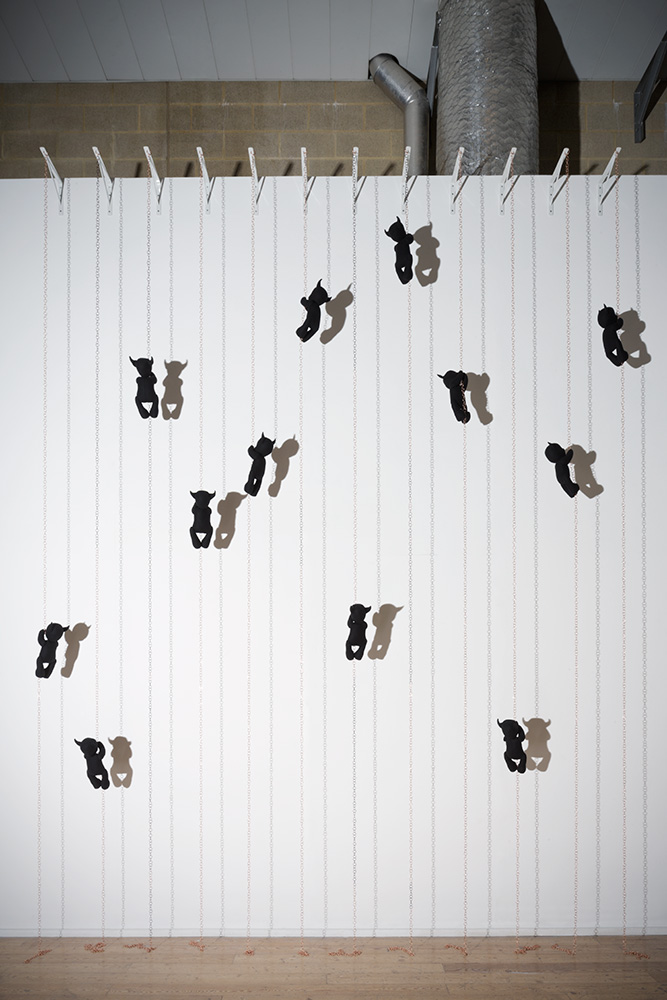 As the provocative title of her new exhibition suggests, Permindar Kaur has transformed the UH Galleries into a place invaded by small vagabonds. Wherever we glance in this surprisingly lofty location, teddies seem to have taken over. But they appear to be far removed from the cuddly playthings so loved by little children. All black, they are devoid of facial features apart from inquisitive ears curving upwards. Instead of lying back and waiting to be fondled, they look surprisingly active. None more so than the teddies visible in a very large piece installed near the panoramic gallery window. All attached to gleaming copper chains, they seem to pause in space before resuming their epic climb. Resolute, plucky and united by this group endeavour, they could hardly be more different from passive toys.

As we make our way round this fascinating and unpredictable show, Kaur makes sure that the teddies convey a very wide range of emotions. Take the narrow gap in a wall, reminding us of a tiny cupboard and stacked with teddies who appear to be climbing on each other. Although they might be involved in a game, these creatures could equally well feel claustrophobic. The teddies at the base of the cupboard look as if they are in danger of being injured or even crushed. Kaur invites us to explore the ambiguity nourishing this work, caught halfway between the bleak possibility of imprisonment and a far more reassuring sense of fun.

That is why her exhibition proves so rewarding to explore. All the pieces displayed here are the product of her residency at the University of Hertfordshire, based in a studio at the School of Creative Arts where she found herself surrounded by busy students. Rather than finding their presence disturbing, she was immensely stimulated by the noise and activity. The students’ swift, restless energy made her feel slower by comparison, yet Kaur’s show now testifies to the fruitful time she has enjoyed here. An intriguing air of mystery can be detected throughout the exhibition, especially in a work called Black Curtain (2015) where the teddies are suspended in the camouflage-like fabric and become part of its pattern. At first, we might not even see them lurking there, but then they begin to emerge. Half protected and half disturbing, they typify Kaur’s subtle ability to keep us guessing about their true significance.

One of the most alarming exhibits is Armoured Truck (2016). We are unable to discover who is driving this stark container, which resembles a vehicle, a cage and a cot. Even so, it looks ominous enough, and the teddies heaped inside could be finding themselves transported to a very sinister destination. Because our news at the moment is so dominated by incessant reports about the plight of migrants, they spring to mind when we look at Armoured Truck. But Kaur did not specifically intend it to address this issue, even though she realizes that some viewers are bound to think about the tragedy of present-day migrancy when confronted by this sculpture.

Another piece, Watching and Seeing Unheard (1992), was produced at a far earlier stage in Kaur’s career when she was studying at Glasgow School of Art. There, in the early 1990s, she wanted this work to reflect an awareness of her family members who lived in Glasgow and cultivated their privacy. Growing up in Nottingham, she had been very conscious of her Indian and British background. And when Kaur first arrived at her UH residency, she realised that the title Watching and Seeing Unheard reflected her own feelings, quietly observing all the intense student activity.

Hence, perhaps, her decision to make a new piece where a teddy is seen perched in the branches of a tree. With one leg hanging loose and the other resting expectantly on a curved branch, the creature appears to be caught at an ambiguous stage between relaxing, listening and preparing itself for action. But we can easily imagine this teddy deciding to jump down and become very busy indeed, just like the artist who made him. There has always been an autobiographical element in Kaur’s multi-layered work, and Branch (2015) is no exception.

Nor is Classroom (2016), where a deep blue teddy sits on a steel chair as if spellbound by the teacher’s words. This time, it conveys Kaur’s realisation that her residency had sent her back to school. The contrast between the cold, hard metal in the chair and the creature’s soft fabric intensifies the atmosphere. Her surprising decision to employ blue rather than black reflects Kaur’s desire to give this teddy a certain amount of sadness, while at the same time emphasizing the enlightenment she is receiving from an educational institution.

But the copper tag dangling from the creature’s left ear is far removed from anything autobiographical. It reminds us that the teddy is actually an animal, and part of a branded herd or species.

Her urge to make a piece called Classroom does not simply reflect Kaur’s awareness of the knowledge she has gained during this highly productive residency. It also refers, in a more general way, to the ten-year break she took while the millennium came and went. That radical decision, to stop making art for such a lengthy period, inevitably made Kaur wonder if she had changed after resuming her work a few years ago. Although she felt like the same person,
her art was indeed different. It is more active and solid, while at the same time expressing a nervous and caring vision. Now, at the age of 50, Kaur has developed into a deeply compassionate artist without sacrificing the playful wit which always counter-balanced her realisation that darkness is ever-present in our alarming, turbulent world.

Richard Cork is an award-winning art critic, historian, broadcaster and exhibition curator. His most recent book is ‘Face To Face: Interviews With Artists’, published by Tate in 2015.