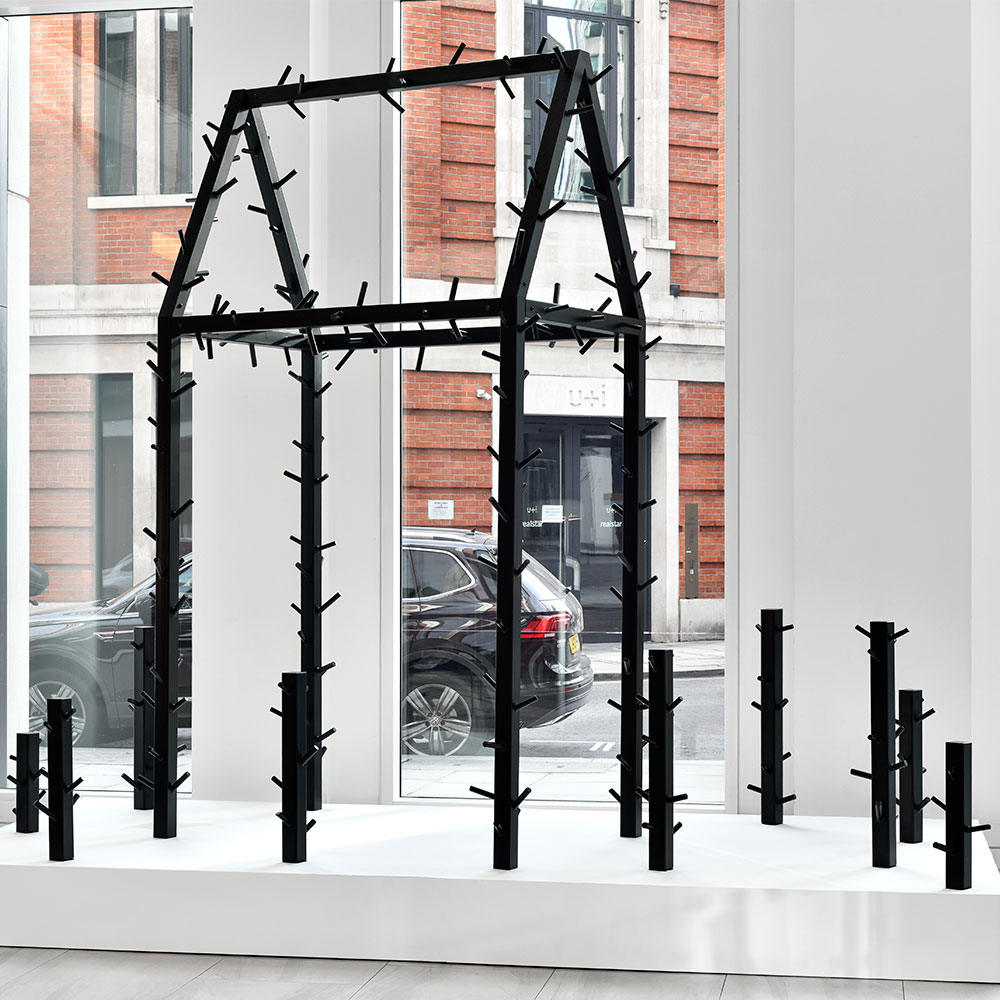 Between Playful and Disturbing: A Conversation with Permindar Kaur

Approaching the familiar as though it were a fairy tale, Permindar Kaur uses the uncanny as camouflage in order to re-explain ordinary things. In “Home,” her current exhibition at Howick Place in central London, she continues her exploration of “private” and “public” by uprooting basic domestic objects and reintroducing them as freakishly distorted furnishings that enjoy the safety of the exhibition space while wanting to be free of it. Here, the notion of home becomes as potentially threatening as what lies beyond the walls. Addressing the uneasy energies of domesticity, Kaur takes things that have become almost invisible to us, like beds, tables, and chairs, and skillfully exaggerates their scale and characteristics while alienating them from their original function. Transformed into misshapen stage props (and no longer offering their accustomed comforts), they become tools to explore the evils lurking in the everyday.

Rajesh Punj: For readers unfamiliar with your work, could you talk about your principal interests?
Permindar Kaur: I am a sculptor and installation artist, and I particularly like working on site-specific installations, which allow me to invest a space with artworks. My approach is playful. I use childlike objects to explore childhood and cultural identity—simple forms such as beds, cots, chairs, and toys—but I subtly and overtly distort them to invoke the uncanny. The works are deceptively familiar in their appearance, and initially, they might recall innocence, childhood, and play, which makes them easily accessible and belies their sinister undertones.

RP: You explain your approach as “playful.” Is that because of the nature of your personality, or the method you use as an artist?
PK: I think both. I am by nature playful in how I approach my work in the studio. I have developed a level of skill with welding and sewing, so I have the freedom to make what I want while continuing to experiment, which allows the ideas to develop intuitively. It is good to have lightness in the work while looking at the darker aspects of life. I want the work to have a duality between being playful and being disturbing. The greatest difficulty is getting the balance right, leaving it open enough for viewers to make up their own minds. To achieve this, I often limit myself to using two contrasting materials—the lightness and vibrancy of colored fabrics against the cold, hard, and heavy contours of metal.

RP: I am interested in how your work touches on identity, home, and belonging. How important are these ideas in terms of your personal background?
PK: Very important. In some works, especially the earlier ones, these are the central themes; while in later works, they are lurking in the background. The home is a recurring and central subject, which has developed over time. I made my first building, The House, in 1990. I painstakingly welded a large mesh using a thick wire rod to make a tall circular structure topped with a dome. The house was empty, but each building block contained a ceramic household object. The bottom three layers contained Indian objects representing my grandparents. In the subsequent three layers, which represented my parents, some Western objects began to appear. The top three layers combined Western and Indian objects to represent me. The objects were placed within the bricks to symbolize their integral relationship to the house. The work looked directly, and in a historically structured way, at how my childhood influences affected the person I had become.

RP: I am intrigued by your choice of objects as sculptural entities. Has it always been your intention to create physical objects that occupy space in the same way that furniture fills a room?
PK: As a student, I chose a generalist fine art course, which was a new concept at the time. Sheffield Polytechnic was one of the only places I knew of that would allow you to study across all the art forms, but still have access to all the specialist departments. And so, I jumped across mediums, trying to find a way of working that suited me. In the end, I liked making objects and was most fascinated by seeing how they related to the space in which they were placed. I still prefer working site-specifically. I want the work to belong to the space so it “feels” like it should be there but at the same time isn’t fully “comfortable.”

Tall Beds (1996) is a good example. When it was first shown at the Ikon Gallery in Birmingham, it altered the space into a strange and surreal bedroom. There were three very tall beds, more than three meters high, with ladders attached to each of them. Once in bed, it created an imagined space high up that offered solitude and quiet from everything around it. However, it was not a place for sleep because there was nothing to protect the “sleeper” from falling from such a height. The work was about not finding solace in sleep. In Falling (1996), a hundred small, soft fabric figures, curled and wrapped up in themselves, covered the entire back wall of the gallery. This new “wallpaper” mirrored the act of falling, as they appeared to gently tumble down the wall. These works didn’t represent a happy home; instead, they revealed an unstable, ambiguous environment.

RP: How did you address the domestic theme in “Home,” your current exhibition?
PK: The exhibition site at Howick Place is a foyer, the entrance to nine floors of office space. I was intrigued to show there because I could respond to the various interpretations of a lobby environment. My first response was to convert the foyer into a private dwelling—bringing together the public and private, something that I’ve worked on before.

The pandemic has highlighted and questioned the stark boundary between home and work environments. These have since merged, and any distinction between them has diminished. Small Table(2020) consists of a child-size chair and table holding an even smaller table and set of four chairs. It’s all constructed out of steel, and there is a starkness, which contrasts with the colorful patchwork tablecloth separating and creating a comfortable domestic setting for the smaller group of furniture. The work is about the dynamic between the imaginary smaller persons sitting around the table with the larger person watching over—or controlling—them. There is a hierarchy to the smaller and larger sets of furniture, but also a balance in which the two coexist without one being dominant. Sited in the foyer, it directly references the unseen power dynamics in both work and home environments.

RP: How does the architecture of Howick Place work with your sculptures?
PK: All of the works relate to the interior architecture of Howick Place. Small Tower (2014–19) consists of seven stacked chairs that together make a tall tower. The largest chair, at the bottom, supports all the progressively smaller chairs. Each subsequent chair is dependent on the support given by the preceding chair. For the sculpture to work, they have to be placed in a correct order; each chair has its place within this hierarchy, with the seventh and smallest at the very top.

Sited in this work environment, Small Tower talks about the hierarchy in the workplace, about established systems of control, and how each one of us imagines our place in a system, whether at work or in the home. Tower (2014), a much larger version of this work, is in Letchworth, U.K., where it symbolizes utopian ideals. The building of cities and towers is about our aspirations and desires to create a community or to leave a mark. Both are about hope and achievement.

RP: There is something entirely absorbing about Overgrown House (2020). Can you explain it as a sculpture and as a symbol?
PK: The first work that greets visitors is Overgrown House, which can be seen from outside. This is a tall structure consisting of a simple square-tube steel framework covered in “pruned shoots.” It is empty and looks uninhabited, with no objects offering clues to the owner’s identity. All that is left is a ruin-like structure, which gives the impression of an abandoned fairy-tale house found in the woods. The “thorns” and stubs on the house, combined with the weeds around it, however, suggest that it is still growing, but now more naturally and organically, not controlled by human intervention. Eventually, nature reclaims the human-made structure. By siting the sculpture in the heart of London, I am emphasizing the ephemerality of urban life.

RP: Your use of height as a visual device intrigues me. What do you gain by raising your sculptures up to the ceiling?
PK: My visual language has developed intuitively over time. From the very beginning, I have played with scale, distortion, and manipulation of forms and spaces, altering them from the miniature to the monumental and making grotesque forms. I like to engage the whole space, responding to the site while challenging spatial constraints—height is one important aspect of that exploration. Size is an ideal way to express different emotions and psychological states. Self-portrait (1990) is an early example of playing with scale; it is over two meters high, featuring my head and constructed from welded wire rods. It is both large and invisible at the same time. In Red Earth (1993), a commission that explores the exploitation of natural resources, I let viewers engage with the work by having them enter a gallery and look up at the train tracks crossing the room above their heads, and at the same time, they see and feel the reddish sand beneath their feet. It was a multisensory experience in which height was one aspect, giving the viewer a sense of the scales involved in the concept of the work. Tall Beds, where the height refers to instability and precariousness, is more obvious, reflecting on sleep and falling. More recently, in Overgrown House, I focus on organic growth, suggesting the possibility of a house continuing to grow upward (as opposed to disintegrating).

June 4, 2021 by Rajesh Punj, Sculpture Magazine, a publication of the International Sculpture Centre