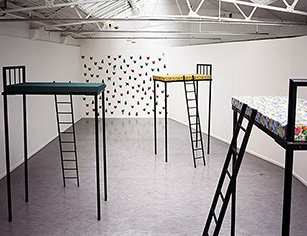 Those who saw her work in ‘The British Art Show‘ were given a taster of the new direction in Permindar Kaur’s work. The suffocating cot with its stack of deadly red mattresses and the violent orange christening gown, complete with assassin’s dagger, were disturbing evocations of the childhood terror of the nursery, the disturbing undercurrents of the fairy tale and the all too premature corruption of innocence. Kaur’s contribution to ‘The British Art Show‘ stood out from the sentimentalized nostalgia and anecdotalism of much of the rest of the work that seems to have replaced genuine reflection on our formative years. Kaur was passed over for serious attention in most commentary on ‘The British Art Show‘, but this new installation at the Ikon and the exhibition of recent work at the Mead Gallery give space for a broader consideration of the rich diversity of forms found in her work.

In the last few years Permindar Kaur has spent most of her time in Barcelona, and the period abroad seems to have softened the more obvious ‘identity politics’ connotations of her previous work. The super-tall nursery beds of Cold Comfort, that are the main feature of the Ikon installation, take an obvious cue from Marina Abramovic’s towering Venus Beds shown last year in Oxford. Like Abramovic, Kaur’s objects imply a direct physical affect on the body of the viewer. The work is the flip-side of Pipilotti Rist’s The Room, recently shown at Chisenhale Gallery, where similarly outsized furniture generated a disabling feeling of infantile comfort (see AM197). The elevated beds could also be seen as a protection device, designed to keep the incumbent well above any nightmare monsters that may be lurking underneath. That said, the height of them does imply some pretty big nightmares. Kaur’s objects make you feel disconcerted and anxious because the sense of physical and mental peril is unambiguous. This is not the usual ‘body as metaphor’ scam, nor does the artist use a specific body as an easy trigger for recognition. The emotional content of the work is something deeper and darker, it deals with absence, an absence which is essentially unknowable but nevertheless devastating in affect.

The series of doll-like cloth figures, pinned in a grid arrangement to one wall, are in part body symbols but also fold in on themselves to become abstract gestures. The doll is a cultural curious object, a childhood companion it is also ritualized by the adult as a symbol for their own lost innocence, sometimes used by the distressed as a means of retreating from a contemporary reality that is too harsh to bear. Multiplying the doll forms reduces their individuality, it is like a mass grave or a depiction of ‘The Massacre of the Innocents‘, to deal with the enormity of the whole you have to remove yourself from the separate micro-dramas. A very different effect is produced by the work Small Martyr, where a single figure of similar scale is pinned to the wall by a metal rod. Empathy for this individual’s plight is immediate; it is curious to feel oneself being moved by such a common object. Kaur attaches antique Indian-styled boots and a helmet to the diminutive figure, an ineffective attempt to harden it against the world, to turn it into ‘mummy’s little soldier’.

From the wall opposite to the cloth figures hang four loose fabric forms. Whether intentional or not, it is amusing to discover that what at first appears to be a Robert Morris-type felt anti-form turns out to be a large satin horse. While Morris dealt with materiality, Kaur literally describes the lack of substance and presence: there is no stuffing in any of her cloth forms. At many other levels Kaur’s work plays with the visual languages of Minimal and Conceptual art, refracting them with her own highly personalized concerns. This is a good thing. The raw content of a work like Loss, consisting of a metal cot-like structure the bottom of which is filled with ash, is harrowing. At the same time the simple material associations of the work made me think of Kounellis. Kaur carefully filters the cathartic function that her art practice clearly provides for her through a sophisticated engagement with the Modernist tradition. It is a rare thing to encounter work of such complexity that still manages to communicate on such an emotive level. Thanks Permindar.