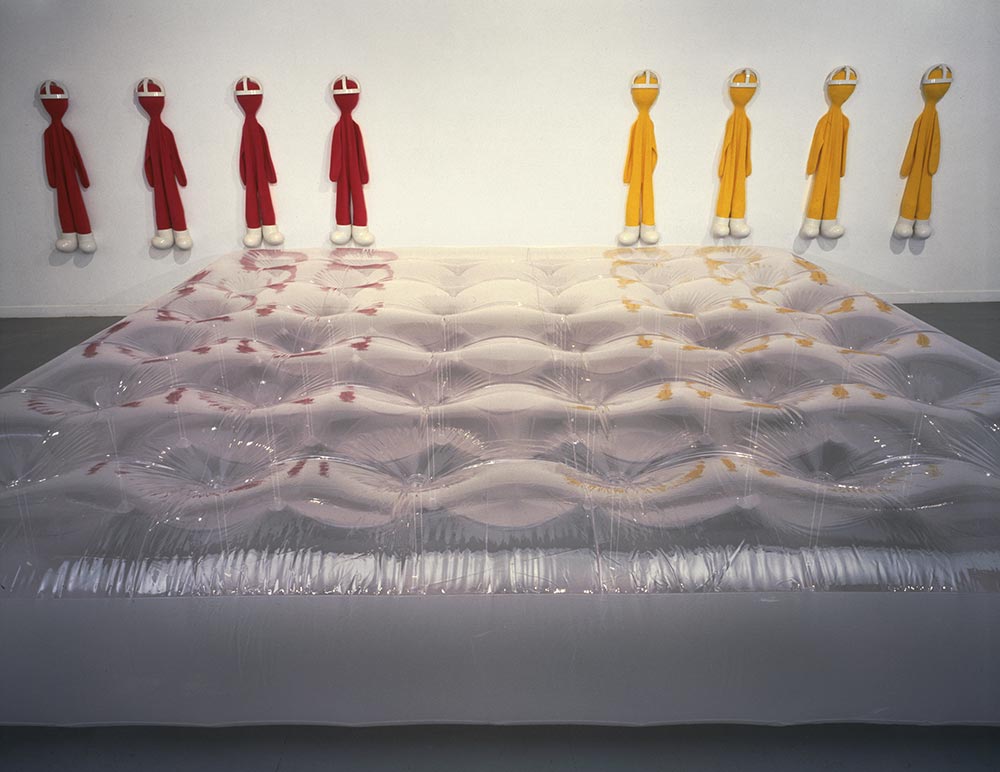 In the middle of the absurdity that makes up the second half of Waiting for Godot, Beckett, in one of the longest stage directions of the play, writes a play of hats. The two characters Vladimir and Estragon begin a routine which involves their respective hats and a hat that has been left on stage: one tries a hat on, adjusts it and hands the spare over to the other who takes his hat off, tries the new one on, adjusts it and hands the spare third hat back. Six changes of hat take place before they start to pass the same, undesired hat (which happens to be Vladimir’s) back and forth thus bringing the exchange to a halt. Estragon, annoyed by the whole charade soon complains:

“I’m going.” After a short pause, Vladimir answers: “Will you not play?”‘*

This momentary fulfillment through play has been a constant theme in the work of Permindar Kaur, perhaps most clearly seen in the installation You and Me that in one of its incarnations joyously and somewhat incongruously rioted down a large wall of a Whitechapel Gallery exhibition of Indian miniatures. The piece consisted of 52 pairs of simple figures cut from soft fleece material; each pair seemingly absorbed in some sort of activity with their other half. Play was suggested by the myriad of interactions (one pair near the middle seemed to be doing some sort of can-can dance), and the toy-like appearance of the figures re-enforced this. Such fleece figures are the only signs of presence in Kaur’s oeuvre to date and “You and Me” was a rare occasion of seeing the figures interact with each other. More often they seem self-absorbed, contorted into positions as if they are attempting to turn in on themselves; for example an untitled piece from 1995 where two yellow figures are seen sitting in identical long-legged chairs, each with their head resting on tucked up knees which their hands enveloped. On other occasions, they have appeared with a simple crown and boots on, transformed into sad, sightless warrior figures whose destiny is sometimes an unhappy one; in Small Martyr such a figure was impaled through its collar on the end of a long slender spear. Relatives of this sad warrior populate Kaur’s new piece Out of Breath, but their white futuristic helmets and matching white boots suggest that something different (perhaps a new game?) is in the air.

On first sight of Out of Breath the similarity to the figure in Small Martyr is clear – for the eight figures in Out of Breath are not only wearing helmets and boots but they are attached to the wall of the gallery space. They have the same slightly melancholic look about them, a result of the lack of stuffing between head and feet resulting in a limp body. Nevertheless there are also immediate differences. Firstly there are eight of them, all the same size but clearly divided into two camps through the colour of their fleece bodies: one group sports a happy yellow, the other group a shocking fuchsia. The second difference is that instead of being set alone in the gallery space, the eight figures are hovering over and slightly beyond a large, inflated, plastic mattress.

This juxtaposition of figures and mattress is crucial because until this point Kaur has kept works about place separate from works about presence. Consequently when she does use the fleece figures they are usually seen in isolation stuck to the gallery wall or slumped on the floor, and when they have been placed in a location it has been a fairly basic piece of accommodation; a tall, unfriendly chair or a simple bed for instance. Conversely Kaur’s handling of place has stressed the lack of presence – an unmade bed, a cot so full that no child could fit in, a series of small, untouched beds. Previous commentators have picked up on these troubling, empty scenes and it is no surprise that Freud’s model of the unheimlich – the uncanny – has been invoked in an attempt to suggest what these pieces articulate .2 Beds, cots, mattresses and chairs ought to be the stuff of everyday domesticity, but in Kaur’s hands they have been refashioned to convey danger and quiet menace, and thus lend themselves perfectly to Freud’s idea of the familiar returning in a surprising and disquieting manner, turning from homely (heimlich) objects into deeply unhomely (unheimlich) horrors.

Such a treatment of place might suggest that neither our fuchsia nor our yellow teams are in for a particularly fun time. The uncanny is a mechanism where the repressed returns as a startling double, and the mirroring between the two groups in Out of Breath might suggest that Kaur is extending her exploration of the uncanny from place to figure. Problems with such a neat theoretical closure only appear when one puts Freud aside for the moment and looks at the piece: there is nothing remotely disquieting about it. The clear plastic inflatable mattress is not one of the dark, enclosed places that Kaur has made before, but is a scene of light and life, and even vaguely suggestive of a 70s water-bed. One could, just about, read one group as the uncanny double of the other, but no-one in Freud ever wore shocking pink, or for that matter, cutesy white boots. This simply is not the stuff that repressed memories are made of.

If the model of the uncanny is to be laid aside, one has to ask: what type of relationship do these two almost identical groups have? What type of doubling is going on here? This is certainly no Hegelian master slave dialectic, and without dialectic what basis is there for the conflict that their helmets might suggest was imminent? Perhaps the best model of doubling we can turn to in order to explore the dynamics of this odd grouping is the idea of mimicry as articulated by Homi Bhabha in his re-reading of Jacques Lacan .3 Mimicry is an act of repetition rather than a rediscovery of something which has been repressed – Lacan compares it to the donning of camouflage and Bhabha sums it up with his phrase “almost the same but not quite.” To mimic the other is to destabilize its feeling of uniqueness from which springs authority and lock it into an endless exchange, it is a way of making sense of the self by being able to identify with an other who is almost the same but recognizably different from the self. In a world where all the old certainties of what we are or what we are supposed to be doing have disappeared this is one of the few strategies left for there is not even a return of the repressed which can be used as an essential core of inner truth. It is a game of exchange that we can see in the game of hats that Vladimir and Estragon play as increasingly they realize that Godot will never turn up to tell them what it all means. Like Beckett’s characters who cannot even trust their weak and fading memories, Kaur’s warriors are hollow figures. They need the accessories of helmet and boots to give them some substance, but more crucially (like Vladimir and Estragon) they need the presence of the other group who are “almost the same but not quite” in order to give them a sense of identity.

It seems that the Kaur has been working through this idea of mimicry. The figures in You and Me might have all been the same shape, but their most meaningful interaction was with their respective partners. Despite the hilarity of some of their acts, there was a hint of melancholy about the piece for each moment of communication seemed arrested in its own little world. The work that Kaur is producing in her studio at the moment gives this idea of mimicry a more secure grounding in the here and now: each set of two figures is joined in an overlap which varies from pair to pair. They are seen at the very moment of articulating their difference from each other, and so this is a moment of becoming. Out of Breath is closer to the spirit of these pieces than to You and Me; if anything, it takes this moment of becoming back a fraction to a moment of potential or imminence. The positioning of the figures past the edge and above the mattress makes the space into an arena waiting to be entered, No immediate or obvious reading of the mattress forces itself upon the viewer. To the analytically inclined (reclined?) it might be tempting to read the fasteners which are on top of the mattress which provide moments of tautness through the shapeless inflatable mass as Lacan’s “points de caption” (upholstery buttons). Lacan used these to suggests moments where the signifier and signified were knotted together to produce meanings that had an odd eternal resonance in his otherwise ever-shifting picture of the structure of the unconscious, and so we could see the space as playfully referring to the Lacanian unconscious. This might all be too literal and heavy-handed – it might, after all, just be an incredibly large, inflatable mattress. Nevertheless even if one cannot say definitively it is either of these, it is an arena which quite simply, invites. This is in marked contrast to Kaur’s previous treatment of place which was often dark, cavernous and insular (notably her beds in boxes such as The Silent Partner). With its overtones of a bouncy castle or a water-bed, this is an arena which suggests play – it is here, surely, that our two groups can continue their games of charade and mimicry. It is here that the endless play of similarity and difference that structures all our relationships with others could take place. And if the space is one that stands in front of the figures, it is also one that stands in front of us as viewers, although standing below the surface level it is less inviting to us than it is to the figures. We mirror the figures, staring out across the expanse of plastic, and like the doubling that has gone on within the two groups this is not an equal and symmetrical relationship. They are pinned to the wall where we can move; with their costumes and their shape they are more like each other than they are to us (the perennial cry of both the proud individual and the isolated loner); they, at the end of the day, are hollow fleece figures lurching towards personhood through absurd helmets and boots. We, at least, are not made of fleece.

“Will you not play?” If this is a moment of encountering the other which is itself a double, then an invitation is left hanging in the air. The rudimentary helmet and boots suggest not so much a Hegelian readiness to fight to the death, but more the idea of preparing to play fight. Whilst battles have marked points in the grand narrative of history, this mock battle has not even begun and never will; stopped at its very moment of articulation the play of similarity and difference is left to swirl around with no compulsion to settle into polarities, What happens if you pause the narrative for a moment and linger there trying to catch the breath that is ever beyond you? Perhaps we don’t need to even have to reach for the pause button, perhaps like Vladimir and Estragon we know deep down that Godot will never show, that nothing will ever happen. What is left then but the ever-playful, ever-oscillating, infinitely-extendible charades of mimicking the other who is attempting to mimic something that you don’t even fully recognize as yourself. What is left then, but to play?