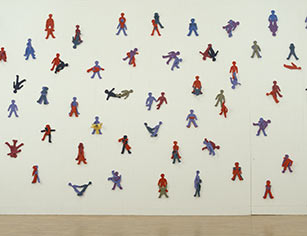 “I was continuing my regular work in the studio, with the Krishna exhibition in the back of my mind. Working on ‘You and Me’, I started to feel that this was the work I wanted to include in the exhibition.

My family are Sikh but the two religions are quite close as Sikhism came from Hinduism. I feel as though I grew up with a knowledge of the stories surrounding Krishna. They were familiar to my parents, for instance, and he was my Grandmother’s favourite god. When we visited her we took her to Mathura to the temple where he was born.

You and Me is very much a work about relationships – and relationships are at the centre of the Krishna story. As ‘the divine lover’, he is most renowned for his relationships with Radha and with the gopis. It’s interesting that these are most often discussed in quite innocent terms.

Previous works of mine have had strong associations with childhood – an atmosphere of innocence and vulnerability, but also with the suggestion that things can be more sinister than they initially appear. In the past my figures
have seemed quite wrapped up and contained within their own world. The figures in You and Me, however, are in couples. They too are quite toy-like and playful but the way in which the couples are positioned is often ambiguous. They hold on to each other in very different ways. One is clasping the other. One looks as though it is throwing the other figure away. Sometimes they look comfortable together, but often they don’t. There are playful elements and sad elements, It could refer to something very personal but in fact I also wanted to keep it quite open so that you are not sure who the figures are – even what gender they are. In a way I wanted them to look like wallpaper – to extend right across the wall, almost as an integral part of the building.”

(Notes taken from a conversation with Permindar Kaur, 21/4/97)
Permindar Kaur was born in Nottingham in 1965. She graduated from Glasgow School of Art in 1992. She has had one-person exhibitions at the Harris Museum and Art Gallery, Preston; The British Council, Barcelona (1993); Gallery Amidol, Gothenburg (1994); Galleri lsodor, Malm6 (1995); Ikon Gallery, Birmingham; Mead Gallery, Warwick Arts Centre (1996). Her work was included in the 1996 British Art Show.