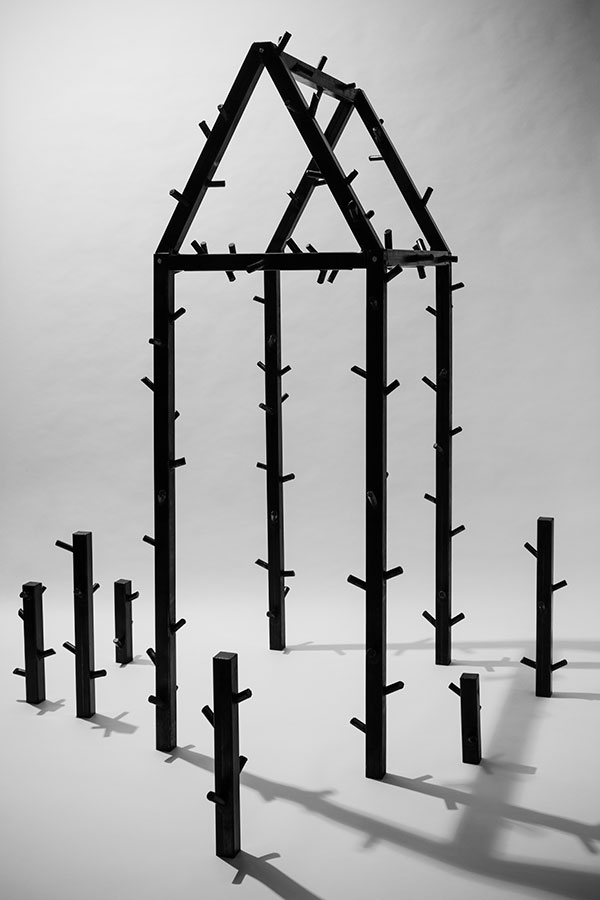 At Home (in a Pandemic)

The question, “Where is home?”, has long preoccupied Permindar Kaur.[i] It is a deceptively simple question, which on reflection is multi-layered and holds within it a hint of dislocation. You would not ask “where is home?” if you were already there. The question implies that ‘home’ is a place elsewhere, with an expectation that it can be located; and that the person asking for directions has an ambition to get there. In addition, the question seems to contain a wistful sense of desire. From an early age, we are encouraged to believe that home is a site of safety and shelter; that the space of home is intimate and comforting, a place where you can be yourself. After all, there is no place like home.

Yet, ‘home’ operates on a number of registers that are rife with conflicts and contradictions. Throughout the Twentieth century and into our current era, artists as varied as Mary Cassatt, Martha Rosler and Mona Hatoum have challenged nostalgic or cozy notions of home as a place of safety and security. Home, especially for women, can be a place of confinement, prohibition, stricture and violence. The trope of the home as a fractured, unsettled, and unsettling site has gained widespread recognition as war, genocide, mass migration, and the global proliferation of refugee camps have shattered the myths of home as site of comfort and shelter.

Since the 1990s, Permindar Kaur has engaged with the conflicting conceptions of home as site of nurture and danger to consider both personal identity and socio-political themes. Her early student works such as Glass Houses, 1991, engaged with experiences of migration, the difficulties of establishing homes in the place of relocation, and meditated on an attachment to distant homelands. In this large-scale sculptural installation, home, or more specifically six scaled-down sculptural houses were presented as sites where family relations, personal identities and cultural affiliations are negotiated. In this work home is addressed through reference to her Indian-Sikh heritage, but in more recent installations such as Ten Teddies & Barrier, 2017, themes of migration and dislocation emerge in Kaur’s sculptures less as autobiography, than as broader meditations on the experience of violence and the traumatic loss of home.

For her exhibition curated by HS Projects at 5 Howick Place, London, Permindar Kaur has installed five sculptures made between 1996 and 2020 that further test and probe our understanding of home. Installed in the lobby of a mixed-use office building in central London, Kaur has arranged her sculptures as though in a private bedroom. Blurring the line between public and private space, the siting of Kaur’s intervention prompts a consideration of behaviours and activities that occur behind closed doors. Would we do in public what we do in the privacy of our own home? Although initiated earlier, preparations for the exhibition took place during 2020 under conditions of Covid-19 restrictions and lockdown, when the distinction between public and private space was forcibly dismantled. Suddenly, homes became workplaces, and once private spaces were invaded by on-line meetings and home-schooling. Simultaneously, for many, forced confinement transformed homely spaces into sites of entrapment; our relationships with our own homes were challenged, while the privileges of having a home were made starkly acute. The government’s dictate, “Stay home, Save lives”, assumed a home to stay in. So, what does it mean to stage an exhibition titled Home, which is populated with uncanny renderings of household furniture and a house-like structure, during a pandemic? Seen in this context Permindar Kaur’s sculptures challenge us to think critically about the concept of ‘home’ – its structures, systems, and biases.

As an arrangement of vertical, horizontal, and angled lines in space, Kaur’s most recent work, Overgrown House, 2020, could be described as a three-dimensional drawing. The simplified outline of a rectangular space capped with a triangular roof is familiar to those of us who grew up in standardized housing in Britain, and recalls childhood drawing of houses and homes. But to this structure Kaur had made a significant intervention: the welded steel bars are sprouting, and not only that, the house/structure is surrounded by short upright bars emerging from the floor. The overall effect is to suggest that this is some form of hybrid metallic tree house, and that the adjacent shoots will grow and merge into similar dwellings. In keeping with Kaur’s works from the mid-1990s which referred to children’s fairytales, and her reference to Maurice Sendak’s 1963 illustrated story Where The Wild Things Are in the multi-part soft sculpture, We Are All Animals, 2010, it is tempting to make connections between Overgrown House and imagined cottages in the woods, or the vines that encased Sleeping Beauty’s castle. Yet, another look reveals that the sprouts are uniform in length – they have been pruned, managed. As such, any gesture towards a fantastical house in an enchanted forest coexists with more sinister references to inhospitable dwellings, of homes stripped back, to barbed wire, and danger. Overgrown House with its shoots may offer up the house as a site of nurture and growth, yet those same shoots have the potential to maim, to overpower.

Small Tower, 2014-19, may be described as a tower of chairs; an oversized steel chair at the base supports a series of six progressively smaller hand-made chairs, each standing on the seat of the chair beneath. In its linear, vertical form, with the incorporation of space into its gridded structure, in one interpretation the sculpture has a lightness and optimism, perhaps recalling the Eiffel Tower (1889) or Vladimir Tatlin’s model for the Monument to the Third International (1919-20). From another perspective, Kaur’s Small Tower, and indeed, Overgrown House, recalls the formal characteristics and conceptual tactics associated with the large-scale Minimalist sculptures of (for example) Tony Smith or Dan Graham. Like much Minimalist sculpture from1960s, Kaur uses industrial materials, and repeated geometric and modular forms in Small Tower, creating a work that is neither small enough to be an object, nor large enough to be architecture. Yet, like many women artists of her generation, Kaur creatively adapts and reconfigures Minimalism according to her own artistic agenda and inter-subjective concerns.[ii] She has stated that she conceived Small Tower as a meditation on hierarchical systems of power.[iii] Those at the ‘top’ usually wield the most power, while those below whether willingly or not, hold up that power. Importantly, for the sculpture – and hierarchical power structures – to ‘work’, the components have to be placed in the ‘correct’ order, perhaps reflecting the seemingly insurmountable challenge of changing structural inequalities. Here, it is possible to see the ways in which Kaur has refigured Minimalism to suit a more socially conscious, feminist agenda.

Although many of Kaur’s sculptures take the form of household furniture –beds, chairs, tables– they are non-functioning objects; she doesn’t use real furniture, but rather she makes sculptures, playing with size and scale to describe a situation, feeling or system. Reading the domestic furniture of Small Tower as a metaphor for patriarchal power and oppression within the home, Kaur perhaps anticipates the unequal division of domestic labour during the Covid-19 pandemic: a precarious balancing act in which “women are bearing the brunt of childcare responsibilities, household chores and homeschooling during lockdown, irrespective of whether they are working or not”.[iv] And although women might want a ‘seat at the table’, one reading of Small Table, 2020, might suggest that on attaining or claiming that place, another table and another set of systems and challenges, have to be negotiated.

Yet, throughout Kaur’s work there is a resistance to unitary or didactic interpretation. Her sculptures solicit an intersubjective dialogue with their audiences, so that multiple interpretations of individual works might co-exist. ‘Simultaneity’ may thus be identified as a central characteristic of Kaur’s sculptural practice. In her sculptures there is often a concurrent and disorientating sense of familiarity, attraction, discomfort, and peril. In Untitled – Bed, 2020, a flock of small, soft, brightly coloured oval balls huddle beneath a black, metallic bed-like frame. The material contrast between the dark, stark, steel slats above and the soft appealing blobs huddling below creates a sense of empathy for the colourful creatures. Are these little creatures frightened, hiding, or trapped? One brave red blob seems to venture out, perhaps to see if it is safe for the others to follow. Moving closer though, we can see that these blobs have copper prickles all over their backs; are these strange hedgehog-like creatures benevolent? Perhaps they have been put away under the bed in order to keep others in the house safe. Are they multiplying under there? Perhaps like the Tribbles in Star Trek the threat lies not in any overt violence, but in their over-reproduction. Or maybe they are more like the cute Mogwai, which spawns destructive Gremlins. The frisson contained within these fuchsia, sunshine-yellow, bottle-green and rusty-orange blobs is both appealing and anxiety-inducing.

Seen in the context of 2021, Covid-19 and lockdown, Untitled – Bed prompts other readings too. Do Kaur’s unicellular organisms spread disease, are they parasitic? Do they threaten the homes, the beds, to which we have been confined? The metal structure of Untitled – Bed is recognizable as a bed, but in Kaur’s rendering has been defamiliarized. The bed frame is narrower than a standard single bed so that it becomes a precarious site for sleeping, and devoid of a mattress is unwelcoming. An uncomfortable sleep is proffered, while rolling off and falling into the realm of the blobs below becomes an unnerving possibility. Here the bed is not a site of respite and recuperation; sleep may not bring rejuvenation. As such, Untitled – Bed encourages a reflection on the privilege that comes with safe sleep, in contrast to the dangerous conditions many are forced to endure, whether in abusive households, immigration detention centres, or prison.[v]

At over 2 meters tall, the title of Tall Chairs, 1996, seems like an understatement. In this multi-part sculpture, the legs of two chairs have been stretched in order to elevate the seats, while its other proportions remain unchanged. Sitting on each chair is a yellow fleece figure; although each has a large, rounded belly, the limbs and head are limp. The head shape flops between the folded knees and legs, while the arms wrap around the legs and body. Each conveys a sense of deflation and isolation, exacerbated by the fact that the figures do not touch or interact. As each seated figure hugs and holds itself, the sculpture conveys a sense of being alone despite the proximity of its protagonists. Although created in 1996, seen at a moment when social distancing has become a new-normal, Kaur’s sculpture has an immediate and contemporary resonance. While the need for human contact –the security of a warm embrace– may have been understood previously, from the position of 2021, there is an urgency in that need, combined with a sense of despair and loss. As thousands upon thousands of people grieve the death of loved ones, many do so alone. In this exhibition, Tall Chairs seems to express the precarity of life, where proximity fails to mitigate the essential aloneness of grief. Here, we are encouraged to think deeply about human vulnerability and are invited to project ourselves into the vertiginous domestic environs that Kaur creates. In that moment of encounter, we are forced to recognize what Judith Butler has called the “universality of human precariousness”.[vi] Simultaneously, Kaur’s choice of bright yellow fabric allows the figures to act as balls of sunshine emanating from above.

[iii] Permindar Kaur in conversation with the author, 14 December 2020.