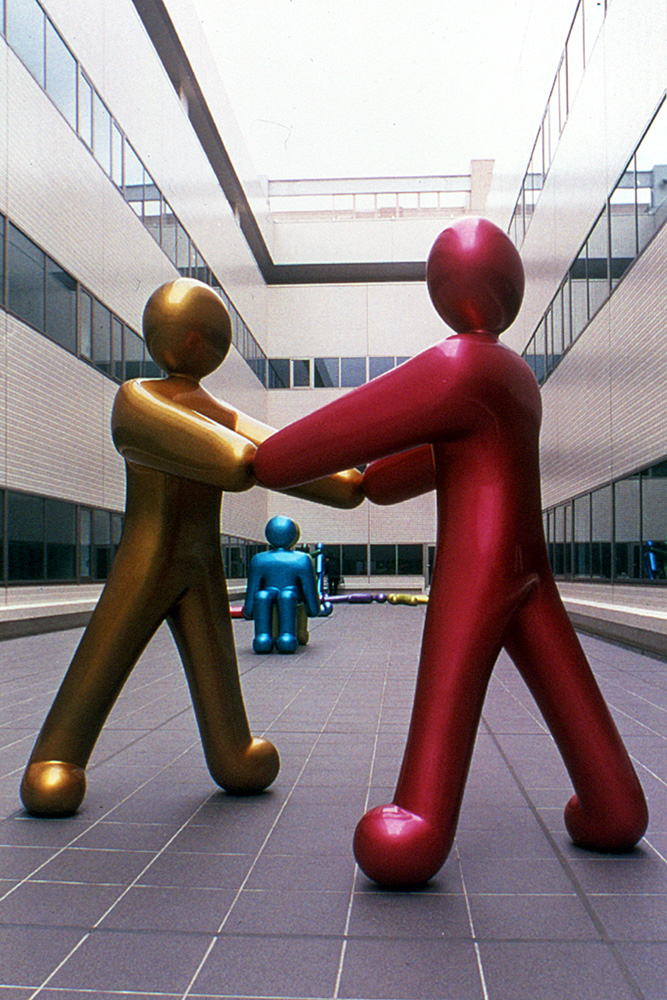 Permindar Kaur is the only woman among the artists participating in this project. Although she was born in England and lives there now, her roots are in India and she often visits there. For a young artist, she has taken part in several international exhibitions and is well known in Japan. Most of her works are feminine and delicate in style and deal with the interrelationship between human body and materials from an original perspective, such as human shapes made of felt placed in layers on a wall or an enlarged photograph of minute pieces of clothing on the palm of a hand.

For this project, she has created a work that matches human forms with the inner court and exterior of the River Site Office. These forms, combined in pairs, are minimal symbols of human beings without any distinction of sex or difference between front and back. They reflect how people draw close together when they feel strong affinities with each other. The artist has chosen colors representative of Asia to form very dense color combinations.

(Artist’s Statements)
This work is about relationships. The seven pairs of large figures seem to have been released or let loose into the large courtyard. Each pair is wrapped up in their own world, acting out a silent scenario. It is as if they have been caught at this moment in a story which is open and reflective.

The relationships between the figures are ambiguous. In one pair they appear to be supportive, perhaps even happy to see each other. In another they have their backs to each other. In this pair they may be playing a game contentedly, or else they are not talking to each other – it is up to the viewer to decide. This ambiguity suggests how easily a hug can turn into a struggle.

The figures have a basic stylistic form and they can be seen as either male or female. The only difference between them is in their bright metallic colors. They are larger than human scale but not so large as to be overbearing. It is therefore easy for the viewer to project his or her own interpretations onto the figures: what is going on? Do the figures know each other? Are they happy in this courtyard? Have they been left to play?