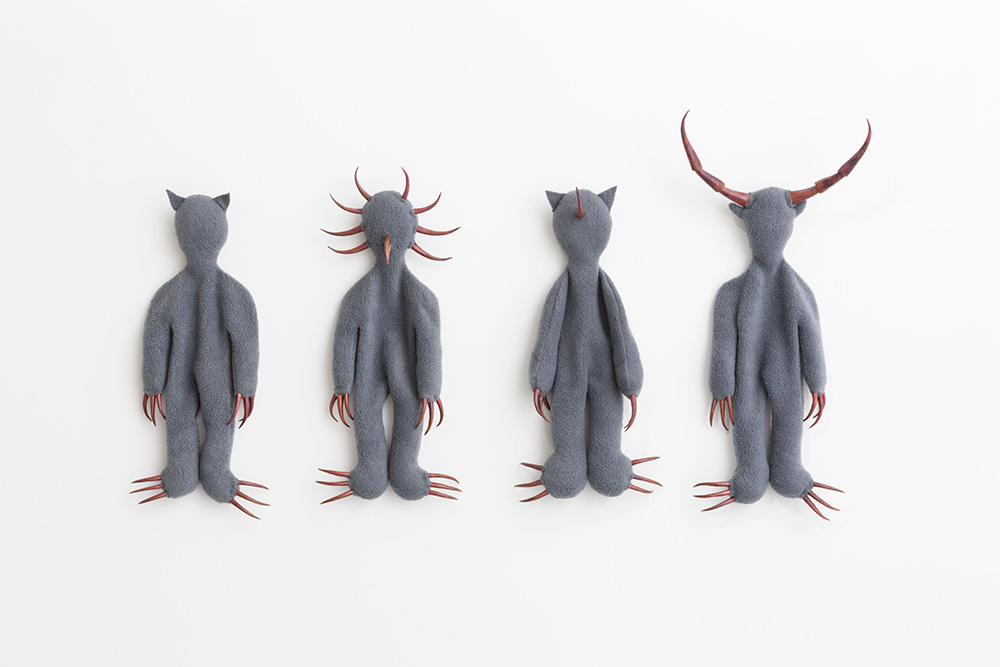 We Are All Animals

We Are All Wild Things

On the way to or from the Djanogly Gallery, we all most probably spot pictograms of the human form in civic signage. Directions inside buildings and on the motorway, as well as the green or red lights at a street crossing, use simplified figures, largely gender-, age- or race-neutral, indicating that you and I should follow their guidance. As citizens, we are turned into a simple logo. For our own safety, the familiar ‘man digging’ and ‘children crossing’ signs were designed by Margaret Calvert in 1963. Permindar Kaur adapts this vivid shorthand for humanity, placing her own human ciphers alongside softer, smaller creatures, infants, maybe toys or pets, to set out her paradigms. She reminds us that we are all animals, part of a species. All of us are, though, dependent upon and vulnerable in the individual’s surface protection of skin, hair and nails, along with matters more innate, cultural and individual.

Maurice Sendak’s marvellous illustrated story Where The Wild Things Are was, also in 1963, published in New York, to enchant Permindar Kaur as a small child and later to be shared with her own children. In just over 300 words and many powerful images, Sendak tells of young Max, dressed in his wolf suit (all-in-one pyjamas complete with hood, ears, tail and claws), escaping from banishment to his bedroom for behaving like a “wild thing”. Max conjures up a forest where the really wild things live. There “theyroared their terrible roars and gnashed their terrible teeth and rolled their terrible eyes and showed their terrible claws”, but Max tamed them. First, he urges them to start “a wild rumpus”, then just as suddenly calls a halt. Being really just a lonely and hungry little boy, he travels back “into the night of his very own room where he found his supper waiting for him and it was still hot.”

Permindar Kaur’s latest exhibition Hiding Out presents us with a world of humanoids and other creatures, each inside its own protective coverage. She describes her overarching themes here as hiding and camouflage; blocked doorways; the broken and the fixed.
The earliest work in the show, Independence (1998), is lent from the collection of Nottingham Castle Museum. It has impaled 27 small figures on thin copper poles, hoisting each to a different height. Every figure wears an orange robe, copper coronet and sturdy boots; every one is pinned with head bowed, as if a natural history specimen. Each hangs, with military precision, separate from its brother, sister or comrade: independent, autonomous, and now powerless.  Elsewhere, Permindar Kaur takes these contrasted signature materials – polar fleece and copper – to create independent and interconnected works. We Are All Animals (2010) is a series of small creatures, teddy bear-ish or catlike, with pointy ears and a soft fleece. Each has its breed or personality defined by the colour of its coat and a series of individual protections: claws, horns, stiff whiskers, beaks, and ruffs or manes of hair. Turbans (2012) is a series of small heads with copper beaks, blue skins and delicate copper caps, whose shapes suggest the traditions of the East from Phrygia to India. Pinned in ranks, these works are ordered within a grid as if in scientific study, precise and measured. Yet another group, in a mixture of colours, evokes botanical specimens with copper sepals.

Off with Their Heads (2012) is of the same taxonomy in soft fleece and warm copper. Their small blue heads, more egg-like, whose protective caps or helmets have failed to protect them, seem to come from an Alice-in-Wonderland world in which playthings are executed on a whim:

“The Queen turned crimson with fury, and, after glaring at her for a moment like a wild beast, screamed ‘Off with her head!

These works share preoccupations with much of the canon of Western children’s literature and fairy tales, such as Humpty Dumpty and Little Red Riding Hood, earlier entrenched in our psyche than the tales of Lewis Carroll and Sendak.  As do so many more universal myths, Permindar Kaur’s cast of animal and humanlike creatures acts out elements of profoundly recognisable fears and needs: protection, disguise, identity, restraint, belonging, and survival. In this exhibition, a veil or curtain of claws in Clawed Curtain (2011)separates us from some particular fear of our own – or it might be from the fear itself. Other works, more obliquely, serve a similar purpose.

In Floor Mats (2014)nine shadows of the human figure, rubber matting cut to bend and fold at the waist, lie as if doormats, while they also block our way. They recall the moment in J.M. Barrie’s Peter Pan when Peter’s shadow is cut off by a closing window, severing his links with his adopted human family until it is sewn back on.

In powerful contrast and change of scale, Untitled (2014), was made especially for the Djanogly Art Gallery. Seven larger-than-life steel human figures are bent at the waist as if to stretch or exercise in preparation for a performance, which might be to entertain or to parade, defend or attack. All possibilities are in flux; we must negotiate them. The use of steel is in opposition to Permindar Kaur’s usual attraction to copper for her rich vocabulary of claws and horns. Copper’s warm colour (colour is rare in the natural forms of most metals) recalls the fur of big cats and bears, and the tones of human skin interacting with the sun. Steel is grey-cold, strong, and of the northern hemisphere. Steel speaks more of hide or scales. Copper, when heated then cooled in water, is able to flex, and has a strongly decorative nature.  Each copper claw or beak has a seductive yet aggressive appearance, pulling you in and pushing you away.

A major preoccupation in Kaur’s work over several years has been the notion of camouflage and fitting in, whether in childhood or as an adult. The most explicit series to deal with this theme is Camouflage; one group takes the format of paintings by employing conventional fabric over a wooden stretcher but, in place of paint, each of three patterned fabrics becomes a metaphor for three countries that has been a home for the artist. Spain, where she lived in the 1990s, is evoked througha gold and blue baroque pattern; Sweden, where she lived with her husband and children, is defined by crisp blue and white checks; the memory of India, her parents’ country, shimmers in rich metallic shades. Permindar Kaur was born in Britain – in Nottingham, indeed – and says she would never attempt to select just one symbolic fabric for England.

Within each textile landscape a small creature, made of the same material, is limply suspended, flattening its face to the background and blending in; disappearing, too, into its world of household fabric. The creature is protected by copper claws, although – as does the chameleon – it chooses to hide out among the colours of its temporary habitat, keeping its spikes as a last-ditch defence when on the move. In another group, the artist has created her own patterns, one of which has copper bumps on its surface. These she likens to stars or, in stark contrast, to a rash symptomatic of an illness.

Following this series is a larger group of works Untitled (Colours) (2013), where the “canvases” are in vertical portrait format, its dimensions known in the eighteenth century as the “Kit Cat”. Here, each work uses strongly coloured cotton as the background to its creature, using tone and fabric as a suggestion of mood or emotion as well as of skin. Taking this concept still further in Untitled (Slippage) (2013) the figure that both emrges from and disappears into the fabric is now multi-layered and multi-coloured, with only a single green figure swinging out of ‘true’. The notion of the layered image is reprised in Hidden (2013) where an antlered figure is half hidden behind loose strips of fabric providing the trompe-l’oeil of a dense forest. The artist has knotted each green strip, again causing a camouflage while also providing a pattern, measure and a rhythm.

Another recent group of works turns away from colour and concentrates on the richness of grey fleece, the fluffy visual equivalent of steel. Polar fleece is a synthetic wool substitute (PET) made from the same materials as some plastic packaging, often from recycled plastic bottles. For many years Permindar Kaur has exploited its tactile and visual qualities, particularly its association with cosiness, cuddliness, infanthood, soothing toys and comfort blankets.  Fleece comes in a variety of textures, some as thick as a sheep’s fleece. Kaur has used large grey panels, rug- or tapestry-like, as contemporary heraldic hangings. In a crazy baronial hall, these panels may appear to display hunting trophies: the skins of a horned creature, an antlered beast and – the most apparently vulnerable of all – an unprotected being, although one now their abject equal.

The elements of Permindar Kaur’s sculptural vocabulary, almost hieroglyphs, can be read as equivalents to words and phrases. Some are repeated rhymes, some are riffs, and some are single exclamations. A large black and grey felt work, Shadow (2014) takes further the concept of the figure bearing the weight of words. Small, repetitive human forms are cut out of thick protective felt, looking like a cartoon creation myth. They flicker in front of our eyes as the grey felt underneath contrasts with a black protective layer above it. A colourful counterpart has bright figures tumbling cheerfully down a wall. Each little individual figure is cut in half then sewn back together, the damage mended and still exposed beneath the playfulness.