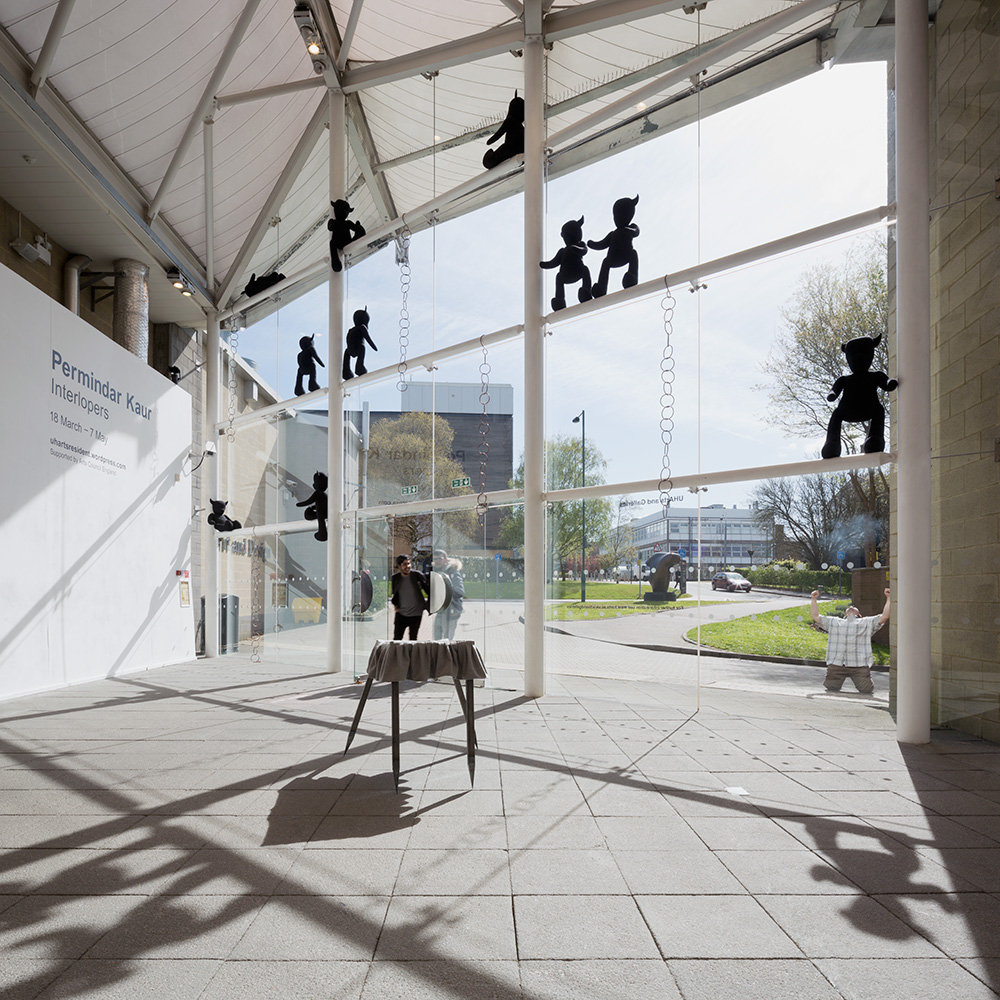 Art with a Life of its Own

When Permindar speaks about her teddies, she credits them with agency. Many of her developments respond to the notion that the teddies are somehow “active” and potentially able to interact with their surroundings. Two of her larger teddies guard the entrance to the gallery, positioned on the highest perches, looking down at those entering and exiting the space. “I want it to feel like they could escape through the doors and windows,” she says.

Permindar speaks about the teddies as if she does not have total control over them or their apparent purpose; as if they are sentient, independent creatures whose motives cannot be anticipated, even by their creator. She describes them as “doing their own thing, existing in the space”. Permindar would like to create the impression that her teddies might not be permanently contained within the gallery space, rather that they could, at any moment, reconfigure themselves.

Unexplained events in the gallery seem to reinforce the idea that they have a life of their own. Since installing her exhibition, Permindar has noticed that certain teddies have been mysteriously rearranged. On occasions she has arrived to find them stacked in a tower, or sunk deeper into their cart. These changes, which were likely the result of audiences’ associations between teddies and play, support Permindar’s descriptions of the teddies as active agents, apparently capable of escaping of their own accord.

In many ways, this approach to her artwork bleeds into Permindar’s working practices. She does not only credit her work with agency, but also with its own creative direction, allowing the work to mould itself into its own finished form. She speaks about her process as if the work leads the way. “The work changes, adapting to the space”, she says, and “you don’t know what will come out”. Each teddy, or each piece of metal, seems to have a destiny that is not solely designed by Permindar herself.

The creative process is a journey into the unknown and one that Permindar describes as “finding something at the back of your head which you didn’t know was there.” Outcomes evolve through experiments, as she works on several pieces simultaneously, led by instinct. Her role is not to plan, but to enable the work to reveal itself. Ideas continue to be shaped throughout the final stages of production.

Permindar likens part of her process to free play. Free play, in Permindar’s case, is a method of idea generation. The goal is to serendipitously discover something which may later be of use. That spark of inspiration must then be followed up: to encounter something that is “interesting, and then… to work out why it’s interesting”.

“Playing with ideas”, Permindar enables the work to resolve into its ideal form. She is not alone in this use of play. Stephen Nachmanovitch has described “free play” as a method for provoking “spontaneous creation”, that often generates “the kind of creative breakthrough from which art and originality emerge”. For Permindar, play is how she makes unexpected leaps and discoveries. While a structured, logical process of development would only yield predictable results, play leads to unexpected destinations.

This intuitive method was partly driven by the space in which the work would be exhibited. The gallery is a large space, requiring engagement with installations and spaces that are much larger than the studio in which the pieces were developed. Permindar notes that large works can’t be considered complete until they are located within the gallery space. Moreover, since it is site-specific, each installation is a different piece of work every time it is sited.

Permindar’s approach is evident in the final installations, as she allowed it to evolve even after the exhibition has opened to the public. The work will never be entirely fixed. Despite the markers of domestic space – a chair, table, and “nest” – the teddies have not yet found a home. They will continue their journey towards their unexpected destination, and even Permindar does not know where they will end up.

Dr Barbara Brownie is a Senior Lecturer in Visual Communication at the University of Hertfordshire.